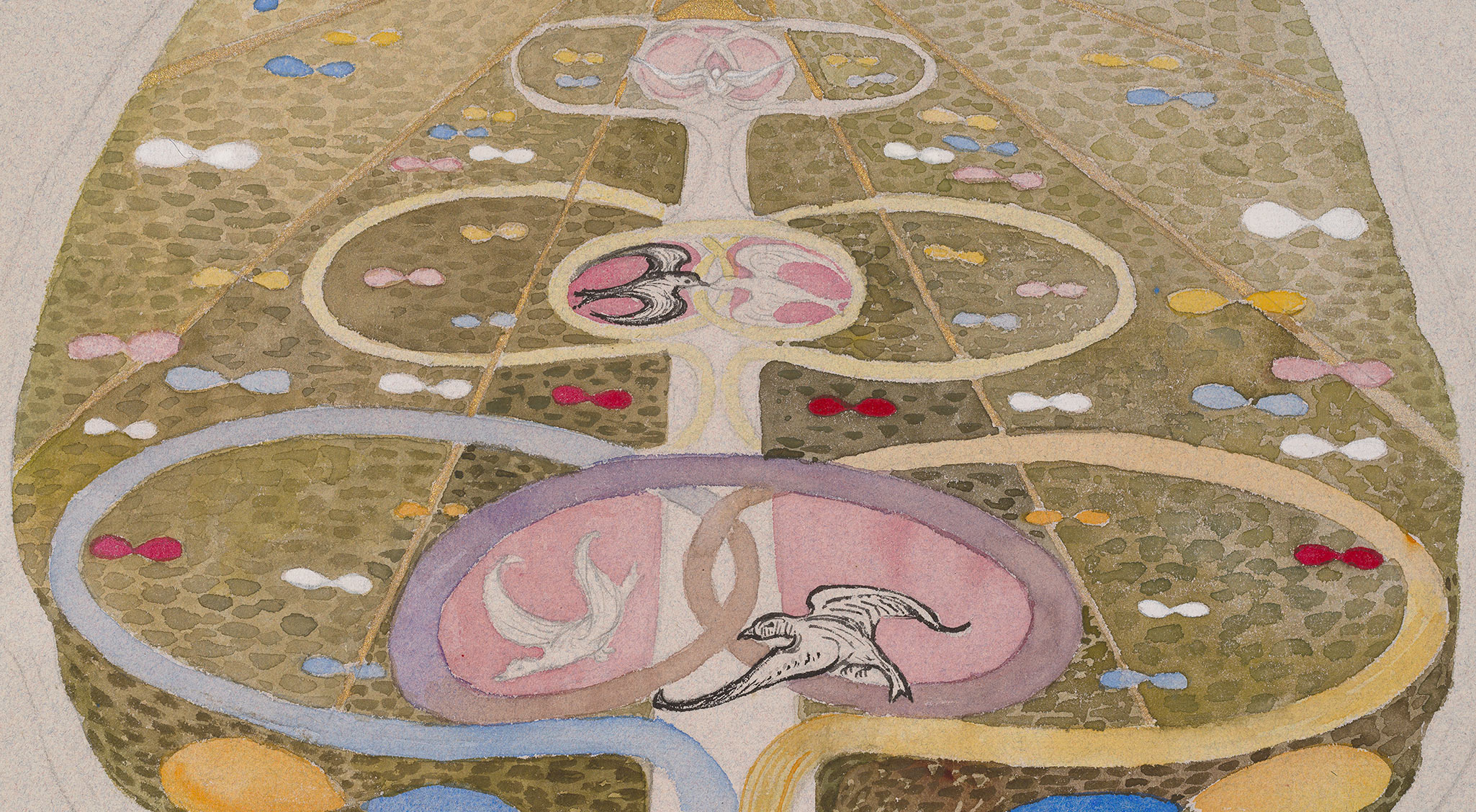 Hilma af Klint’s Tree of Knowledge, 1913–1915, has been acquired by Glenstone Museum

“We had a wonderful experience showing Tree of Knowledge to our New York audiences this fall, breaking all previous attendance records at our space on 69th Street. I am especially excited that I can now present these rare works in London, where Hilma af Klint’s work was actually discovered earlier than in New York. A major presentation in London was at the Serpentine Galleries in 2016.

When we were entrusted with Tree of Knowledge, we were given the mandate to find an institutional home for these works. I am proud to announce that this home will be Glenstone Museum, a truly artist-centric institution, and a place where visual culture, architecture, and nature blend perfectly. I want to assume that Hilma would be pleased,” stated David Zwirner.

Glenstone Museum Director and Co-Founder Emily Wei Rales stated: “Glenstone’s collection is built around singular works that have, in one way or another, radically shifted our collective understanding of art. The discovery of Hilma af Klint’s extraordinary vision and accomplishments in recent years has upended long-held theories about the development of abstraction in Western art, and so this acquisition feels true to our philosophy.”

When asked about the significance of these Hilma af Klint works, Daniel Birnbaum, former director of the Moderna Museet, adjunct member of the Hilma af Klint Foundation, and coeditor of the Hilma af Klint catalogue raisonné, responded: “I’m so pleased to hear that this wonderful Hilma af Klint series will be part of Glenstone Museum. There are no works by Hilma af Klint in American museum collections. It’s an interesting fact that af Klint produced two versions of the Tree of Knowledge series, 1913–1915, a series which belongs to her most important body of work, The Paintings for the Temple. The works acquired by Glenstone Museum are the most significant works by af Klint ever to be sold. Nothing comparable can happen again, because all the other paintings that belong to the central series reside with the foundation and cannot be sold according to the foundation’s statutes. I am glad that they will be part of a first-class collection that is shown to the public. I have spent my life working for public institutions and find it key that works as important as these can reach a big audience.”

Though little known during her lifetime and for decades after, Swedish artist Hilma af Klint (1862–1944) has come to be recognized as one of the most important and inventive artists of the twentieth century. When she began making vibrant, symbolic paintings as early as 1906, her work was radically unlike anything that had come before, and preceded the abstract work of artists such as Wassily Kandinsky, Piet Mondrian, and Kazimir Malevich by several years.

In contrast to those artists, who were more broadly credited for inventing abstraction, af Klint was not directly engaged in any avant-garde circles or art movements, coming to abstraction through her own artistic and personal evolution and development. Af Klint studied at the Royal Academy of Fine Arts in Stockholm for five years starting in 1882, where she gained a reputation as an accomplished painter of naturalistic portraits and landscapes. As with many of her peers, af Klint was profoundly interested in spiritual movements and philosophies, including the then emergent teachings of Theosophy and Anthroposophy as well as Buddhism and Rosicrucianism, among others. She became actively involved in examining the mysteries of the supernatural world, and her interest in visualizing the invisible forces beyond the physical realm led her to explore and represent spiritualist ideas and sentiments in her art.

Together with a group of like-minded women who called themselves “The Five,” she held séances to communicate with the spiritual realm. In 1906, at the age of forty-four, af Klint accepted her major spiritual “commission”: over the next nine years she created a series of 193 visionary works that she titled Paintings for the Temple, the dynamic and bold imagery of which was conveyed to her through a medium. These elaborate and profound compositions constitute some of the earliest abstract paintings in the history of Western art. Af Klint showed her work to very few people during her lifetime, believing that society was not ready to understand the nature of her art and that it should be left to future generations.

While the majority of her groundbreaking work is held together in the collection of the Hilma af Klint Foundation, this suite is a rarely seen set of af Klint’s Tree of Knowledge series, which the artist created in 1913 and 1915 with renewed focus after her four-year hiatus after completing ambitious mediumistic paintings mentioned above. This series reflects her interest in distilling her iconography and in further articulating the spiritualist ideas and philosophies that she was engaged with. These complex, dynamic compositions mix biblical references to Genesis with esoteric iconography and vivid colors and motifs. The undulous, organic forms recall the stylings of art nouveau with an almost taxonomic attention to detail, resulting in fully formed visual allegories about the circle of life and death, darkness and light, spirit and matter, and being and becoming.

In the early 1920s, af Klint gave this set of watercolors as a gift to Rudolf Steiner, the founder of the spiritual and philosophical movement known as Anthroposophy, which influenced her. Around 1927, the works came into the possession of Albert Steffen, who became president of the Anthroposophical Society after Steiner’s death in 1925. It was not known that af Klint had made two versions of the Tree of Knowledge suite (the other is in the holdings of the af Klint Foundation) until the recent rediscovery of this set in the Albert Steffen Stiftung, Dornach, Switzerland. These works were thereafter owned by a private collector, before being acquired by Glenstone Museum.

In early 2023, David Zwirner Books will publish a fully illustrated catalogue around this body of work with a newly commissioned essay by celebrated af Klint scholar Julia Voss, whose comprehensively researched Hilma af Klint, a Biography is forthcoming from The University of Chicago Press in September 2022 (the bestselling German edition was published in 2020 by S. Fischer). Also forthcoming by David Zwirner Books in the summer of 2022 is The Five Lives of Hilma af Klint, a graphic novel by Philipp Deines with a foreword by Julia Voss that illustrates key moments in the artist’s life.