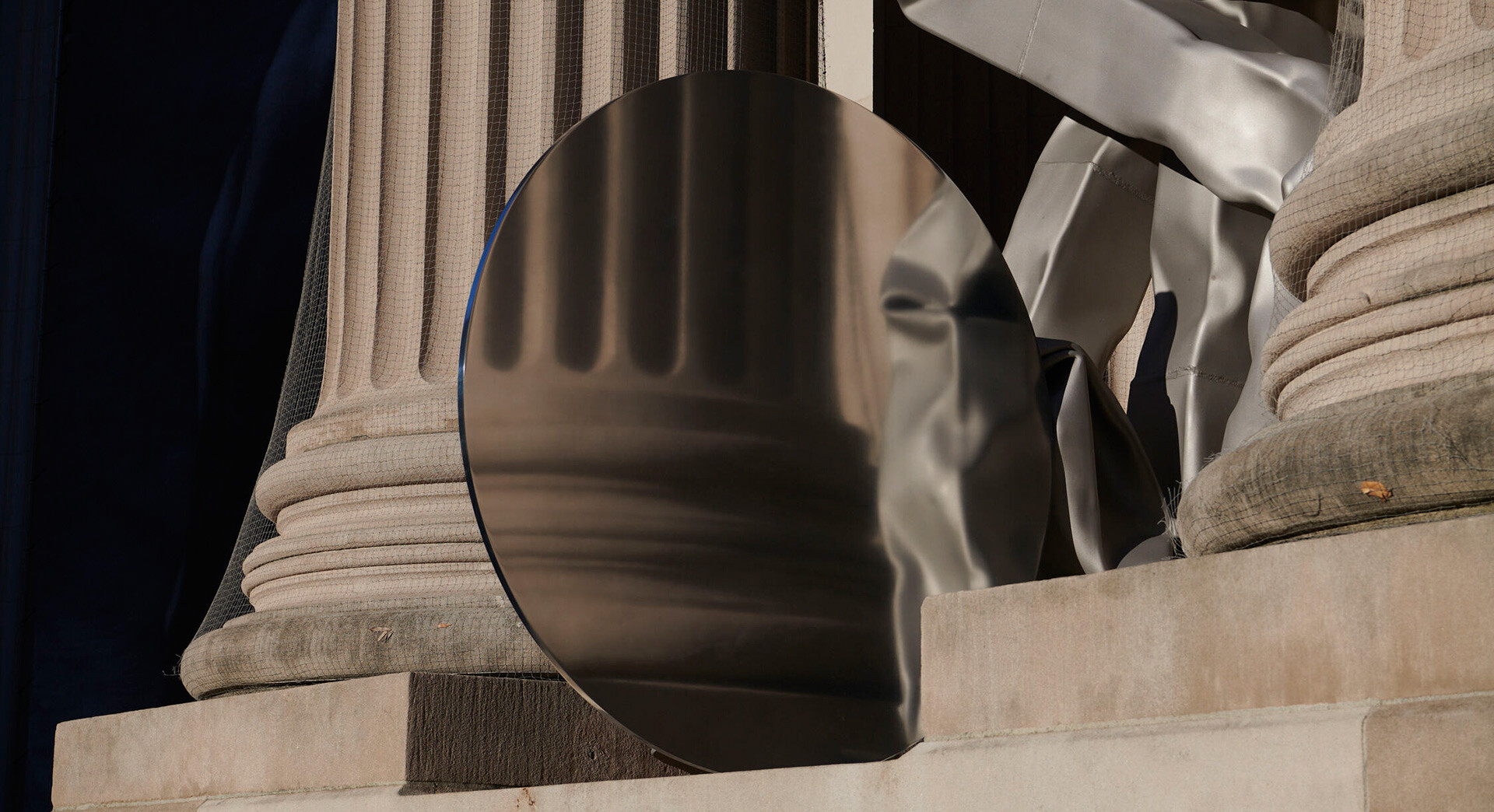 Carol Bove has created four sculptures for The Met Fifth Avenue’s facade niches. The Facade Commission: Carol Bove, The séances aren’t helping is the second commission to be featured on the Museum’s facade and will be on view through fall 2021. Made of sandblasted, contorted stainless-steel tubes and five-foot-wide reflective aluminum disks, the sculptures appear astoundingly lithe and supple, almost mercurial, despite their weight and heft—an effect Bove achieves by pushing her materials to their physical limits using incredible force. Projecting outward from the niches, the works confound perception.

Bove works improvisationally and sculpts at scale and in the round, without preparatory drawings. For this commission, she used a one-to-one mock-up of the Museum’s empty niches that was created in her studio. Bove chose a series of nonrepresentational forms that resonate with modernist styles such as Art Deco and abstraction—a stark contrast to the traditional figurative sculptures that the architect Richard Morris Hunt envisioned for The Met’s facade, which was completed in 1902, but was never fully realized. Bove based the size of the aluminum disks on the diameter of the columns that flank the Museum’s niches and the medallion portraits that adorn the spandrels of the arches. The differing orientations result in a playful, rhythmic pattern, yielding a frisson of delight that might throw viewers slightly off-balance. By astutely engaging the Museum’s facade, reimagining its history, and retooling some of its architectural and design elements, the artist subtly calls for us to reevaluate and reckon with the legacies of tradition.

“Seen from Fifth Avenue," Jason Farago writes in The New York Times, "they appear like a quartet of performers,” Jason Farago writes. “They almost appear to dance as you pass the museum’s four blocks of frontage, like illustrations in a zoetrope. They have an unexpected lightness that belies the steel, and the crunch and crush of their making."

Opening May 4, 2021, David Zwirner will present an exhibition of the artist's new large-scale sculptures at the gallery’s 537 West 20th Street location, marking her fifth solo presentation with the gallery. Featured in the exhibition will be seven vertically oriented works that elaborate on the artist’s ongoing series of “collage sculptures,” composed of various types of steel. These works––made of manipulated steel tubing, painted vibrant red-orange, combined with leaning, bent sheets of hot-rolled steel––envelop the viewer in an immersive presentation that considers the phenomenological experience of form and the surrounding spatial context. Bove’s new sculptures convey an apparent lightness that belies their materiality and monumental scale, and continue the artist’s engagement with the limits of physicality and perception.

Concurrently on view at the uptown gallery on East 69th Street will be an exhibition of new, smaller collage sculptures by the artist. Painted in colors ranging from muted lavender-gray to vibrant yellow, these works engage in different registers of display and scale than the presentation in Chelsea.

To Stay up to Date about New Exhibitions, Available Works, and Artist News