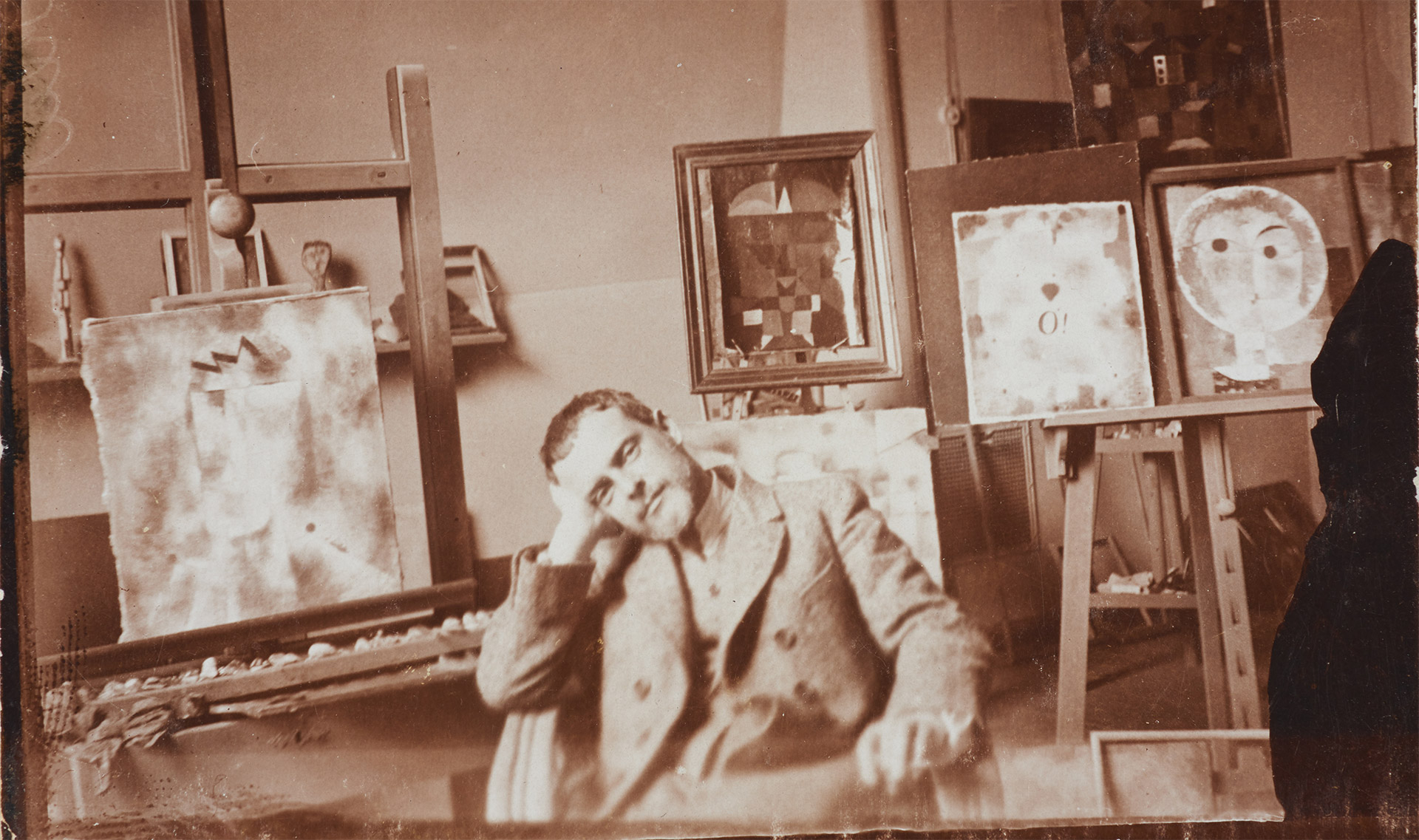 Paul Klee may have been remote in person—some described him, at times, as “unapproachable”—but the territory he opened up through his work continues to affect other artists today, generations after his death in 1940.

“Nothing is more astonishing to the student of Klee than his extraordinary variety,” Alfred Barr, the founding director of New York’s Museum of Modern Art, wrote in 1941. “In quality of imagination also he can hold his own with Picasso.”

Klee’s energetic experimentation with forms and materials has proved influential for artists from Anni Albers and Joan Miró in the 1920s to Ad Reinhardt, Mark Rothko, and living artists such as Etel Adnan, Michaela Flatley, and Richard Tuttle. Clement Greenberg’s famous observation of 1957—“Almost everybody, whether aware or not, was learning from Klee”—still holds true.

During the 1920s, Klee’s unique use of line—he is said to have called it his “most treasured possession”—inspired his contemporaries both formally and conceptually. A student in the Bauhaus weaving workshop when Klee began teaching Theory of Design there, in 1927, the young Anni Albers transformed her teacher’s instruction to “take a line for a walk” into physical form using thread—an approach that propelled her whole career as an artist.

“I was trying to build something out of dots, out of lines,” she later reflected, “out of a structure built of those elemental elements and not the transposition into an idea.”

Among Albers’s notes is her translation into English of a lecture Klee gave in 1924 titled “On Modern Art”—a text she had hoped to have published, as she later wrote in a letter to the German art historian Charlotte Weidler, to “give me a feeling of having said at last in some way THANK YOU to Klee” (emphasis hers).

While the German Bauhaus emphasized rational solutions in the aftermath of the war, Klee’s work also appealed to the surrealist movement with which he was partly aligned, and that sought to reveal the “superior reality” of the subconscious mind. In particular, the “pictorial poetry” of Klee’s work, in which line can have a distinct calligraphic quality within a composition, was a revelation to artists seeking to convey the unconscious.

In works such as III Ich bin gesandt einen Alb zu Nehmen von der Menschheit (III I am sent to relieve mankind of a nightmare) (1918) and Die Zwitscher-Maschine (The twittering machine) (1922), Klee enacted his famous statement, made in a 1920 essay titled “Creative Confession,” that “Art does not reproduce the visible; rather, it makes visible.” In Klee’s work, other artists found a realm of abstraction between the verbal and the visual; his fitful, organic handling appeared to directly inscribe a train of thought, and with a unique lyricism that persisted throughout his oeuvre.

The influence of Klee’s line and his tendency to detach forms from a definitive ground is clear, for example, in the “peinture-poésie”or “painting-poetry” works of the 1920s by Joan Miró, who frequently sought to give expression to memory, and made no secret of the importance the older artist had for him (he likely first encountered Klee’s work in around 1922). “Seeing Miró in light of Klee,“ Elizabeth Hutton Turner writes, “was to witness how Miro had gained entry to an autonomous sphere of abstraction and the unconscious via Klee’s seemingly boundless atmosphere of color and running lines.” Miró later said, “My encounter with Klee’s work was the most important event in my life.”

It may have been through his close friend Miró (whom he met in Paris in 1928), that the sculptor Alexander Calder became one of the earliest American artists to have been affected by Klee. Calder’s “mobiles,” in which bent wire creates lines in space that are weighted and lightly choreographed by attached steel shapes, seem indebted to the structural rhythm of Klee’s compositions, which are similarly “suspended” in two dimensions, and which can appear imbued with movement.

Looking at a painting from 1940 by Ad Reinhardt (titled simply Abstract Painting) in an exhibition in New York in 1997, Grace Glueck noted “a multicolored mosaic of bars and squares that owes a debt to Paul Klee.” In Reinhardt’s blue paintings of the early 1950s, for example, the artist’s commitment to reduction and the exclusion of extraneous details or gestures pointed the way toward a fully abstract art composed of pure, geometric forms.

As if setting the stage for Reinhardt in the forties, Clement Greenberg wrote in his 1939 essay “Avant-Garde and Kitsch” that for artists like Klee, Kandinsky, and Cezanne, “The excitement of their art seems to lie most of all in its pure preoccupation with the invention and arrangement of spaces, surfaces, shapes, colors, etc., to the exclusion of whatever is not necessarily implicated in these factors.”

Despite the observations of critics and other artists’ acknowledgement of Klee’s importance for their work, few museum exhibitions have placed them in dialogue. Last year, The Phillips Collection organized Ten Americans: After Paul Klee, with more than sixty works by William Baziotes, Gene Davis, Adolph Gottlieb, Norman Lewis, Robert Motherwell, Kenneth Noland, Jackson Pollock, Theodoros Stamos, Mark Tobey, and Bradley Walker Tomlin. Duncan Phillips, who founded the collection, had been an avid collector of Klee’s work, acquiring thirteen paintings between 1930 (when the collection was started) and 1953. In 1948, these went on almost continuous view at the museum in “the Klee room”—a space that became a mecca for abstract painters. “No one who has ever lived in Washington,” the critic Barbara Rose wrote “can ever forget the impact of the Klee room at the Phillips Gallery.”

Calling Ten Americans “a welcome intervention,” Dennis Zhou observes in a review that “Mark Tobey, who shared Klee’s interest in calligraphy, is a clear successor to Klee’s pictography; whereas Motherwell’s doodling descends directly from Klee’s own childlike technique…. Adolph Gottlieb’s The Seer (1950), though of a larger scale, employs hieroglyphs that would be at home in one of Klee’s cabinet-sized works. In fact, this observation applies to many of the abstract expressionists: as Gene Davis said in 1983, ‘My last show of symbol paintings are just Klee blown up large.’... The sheer variety of Klee’s output means that abstract expressionists with even seemingly little in common, such as Norman Lewis and William Baziotes, can trace their influences back to different tributaries of the same source.”

It is a source contemporary artists continue returning to. Paintings by the Lebanese poet, writer, and artist Etel Adnan were presented at the Zentrum Paul Klee in 2018—a solo exhibition she called “the summit of my career.”

“When I started painting in the early 1960s,” Adnan recalls in the exhibition catalogue, “The painter who struck me most was Paul Klee…. The tight lines and numerous colors in his work create some sort of network, small pieces, labyrinths that reproduce images of his inner self which, through the magic of his talent, become our own inner selves.”

Noting Klee’s affinity for musical composition (he was a proficient violinist), the American artist Michaela Flatley is drawn to what she perceives as his ability to relate abstract, two-dimensional forms to music. “My persistent obsession with grids has led me to appreciate Klee separate and apart from his modernist peers,” Flatley explains, “namely because of his fluidity, rhythm, and light. Studying Klee’s work has convinced me that grids are temporal, rather than merely spatial, and that notion has guided my artistic investigation.”

“Describing Klee's influence on my development as an artist isn't quite the same as describing the affinities I now feel to his work,” says Brooklyn-based artist Leslie Roberts: “Klee presented the grid as a flexible container for ecstatically luminous color, in sharp contrast to the minimalist grid, which, to me as a young artist, felt severe, unyielding, didactic, and gray. The minimalist grid loomed from above; Klee’s grids glowed from within. In my current work, there are further affinities to Klee, especially to processes combining system and intuition. I also connect to his work's intimate scale. But I've been influenced most by his use of the grid as an abstract language of color.”

Ever animated, ever innovative, Klee’s own artistic experimentation continued until the very end of his life. The drawings and paintings on view at the gallery in New York show his response to illness and societal upheaval in works that are by turns political, solemn, playful, humorous, and poetic, just a year before he died. Even the artist’s line—his treasured possession and lifelong motif—was to evolve in this final period. “He figured out in some remarkable way how to turn it back to the light,” the artist Richard Tuttle observes. On seeing one of Klee’s late works in a recent Tate Modern exhibition, the critic Adrian Searle remarked, “It is a painting that keeps on happening as you look. It is happening still.”

Watch a clip from a walkthrough of Paul Klee: 1939 by the artist Richard Tuttle.

Cover image: Paul Klee in his studio at the Bauhaus, Weimar, 1923.
© Klee-Nachlassverwaltung, Hinterkappelen