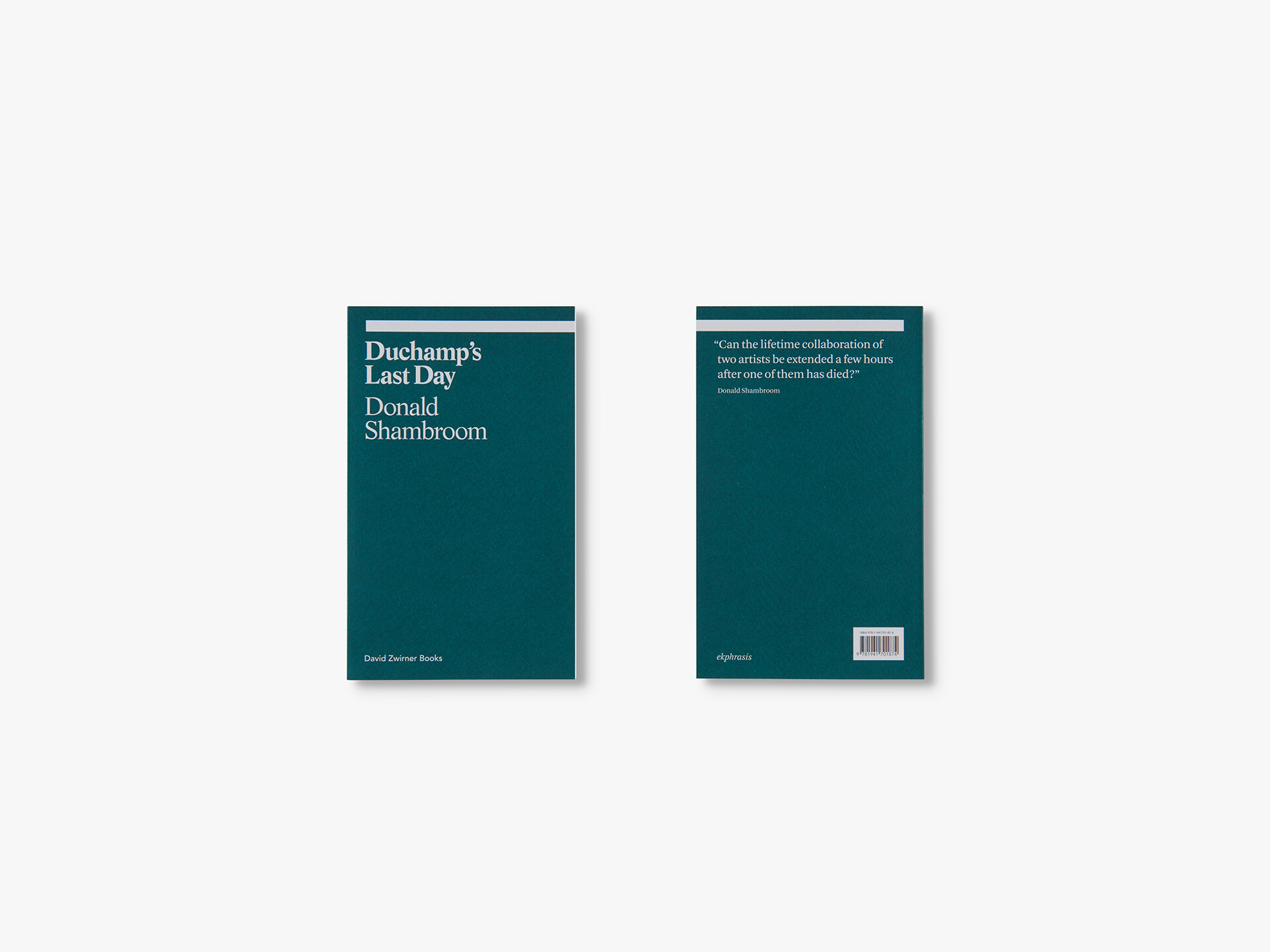 Just moments after Duchamp died, his closest friend Man Ray took a photograph of him. Taking this image as a point of departure, Donald Shambroom begins to examine the surrounding context—the dinner with Man Ray and another friend, Robert Lebel, the night Duchamp died, the conversations about his own death at that dinner and elsewhere, and the larger question of whether this radical artist’s death can be read as an extension of his work.

Can you outline your relationship to Duchamp’s work and legacy?

My story with Duchamp goes back to high school, like a lot of people. It was in 1968 in Advanced Physics class, which I really had no interest in whatsoever. The professor was getting old and he really had no control over the class. I found a book about Duchamp that had been published by Time Life in about ’64. This book just sort of came out of this Time Life series on art, and the general public didn’t really have any idea what it was about. I got this book from the school library and I was looking at it under my desk. Mr. Rosen came round and he looked at it, and I clearly remember him saying, “I have no idea what this is, but I’m sure it’s good for you, so keep reading.”

So, that was the first encounter. In college, I studied philosophy, then I became a painter. There was a time in my senior year when I had a collection of catalogues for graduate schools in my drawer and I was thinking of Duchamp again and asking questions—how it is that someone like me, who is so into Duchamp, happens to become a figurative painter. I think it really has to do with his example of following what compels you, and which isn’t necessarily something other people are doing. I studied Duchamp’s Nude Descending a Staircase—that painting does something that paintings aren’t supposed to do, namely move. It seemed impossible. As I wrote to a friend, “I write about Duchamp. And he helps me with painting. My painting in 2019 gets an inspirational and conceptual shove from Nude Descending a Staircase from 1912. Painted nudes don’t move. Painted heads don’t think. They sit inert on a flat surface. Then again …”

Why did you decide to focus on Duchamp’s last day?

I was interested in his last days and at first it seemed to me that he might have terminated his own life at a certain point. For example, he talks a lot about fifty years—the fifty-year delay that it takes for a painting to turn from nothing to a masterpiece or back again. That’s a recurrent thing. And the day before his death in 1968, he went from Paris to Rouen for the unveiling of a giant bronze sculpture called Le Cheval Majeur (The Large Horse)—that was roughly fifty years after his brother Raymond Duchamp-Villon had conceived the original work in 1914, and exactly one week shy of the fiftieth anniversary of Raymond’s death at the end of the first World War. Man Ray also wrote a statement published in Art in America in 1969—which I have included in the book—saying of Duchamp, “His heart obeyed him and it stopped.” So I was investigating this—which turned out to not be correct, by the way—and it felt like that was the first part of the process. Then, in 2012, I was visiting Francis Naumann, whose gallery shows Duchamp’s work in New York, and he said, “Donald, come out back, sit down, I have to tell you something.” He had received an email with a sort of grainy image of this postmortem photograph from someone working at Getty Research Institute. The picture was unlabeled, unmarked, and no one had ever seen it before. So, I kept working. And it wasn’t until maybe a year later that I focused on the fact that Georges Herbiet and Robert Lebel—two writers who visited Duchamp on his final day—had also written detailed accounts that were published within months of Duchamp’s death.

Does it not strike you as unusual that people were compelled to write these accounts?

I think it is unusual. Publishing an image of a dead person is very unusual—and in 1968, after the horror of two world wars, perhaps even more so. I talked with Carlos Basualdo at the Philadelphia Museum of Art about this, and he described images of death as a form of “toxic pornography” in our culture.

But the thing is that, based on these accounts, Duchamp’s death was kind of an ironically joyful occasion. Duchamp even seemed to convey to his friends that he wouldn’t see them again. There was a sadness to it and that was in the air in their discussions, but there is also an excitement for Duchamp.

I think that this kind of conflict and darkly joyful attitude interested both of these writers as something to explore. Herbiet’s wife had died a few months earlier, and they talked about that. They just found something interesting and enduring and very Duchampian in their friend’s passing. The idea of play and death, which I mention at the end of the book, to most people is incomprehensible. How could those two things come together? But that’s what’s going on in this case.

And what of the photograph?

This image is not something that Duchamp had anything to do with, as I conclude. I really did struggle with it, but basically, the epitaph he wrote says, “Besides, it is always the others who die.” The suggestion is that there is no transition. It’s the world that disappears, and it’s really no big deal. And that’s the way he lived: it’s good if you’ve done your work, and in his case, it’s good if your final work that no one knows about [the installation of Étant donnés (1946–1966) at the Philadelphia Museum of Art] is complete except for the Spanish bricks, which I mention in the book. This is an account of the end of someone’s life that people enjoy reading and that isn’t sad. I think that there’s an interest, and maybe a need, for something of that type, and I’d like to reach some of those readers. It’s not pontificating, it’s not telling you how to do it. And perhaps, within this culture we live in where death is controlled by medicine and that wants to keep you alive forever and ever and ever, it’s a story that might have some use—even for people who have never heard of Duchamp. He wanted it that way, in a sense. He wanted the effect of what he did to function in the wider culture.

In hindsight, has this project influenced your own sense of mortality or infiltrated your thinking in unexpected ways?

Well, in the course of writing, I explored a long list of books on photography and death. There’s Roland Barthes, Susan Sontag, and in the postmodern phase, there is an academic consideration of photography and death. A central question is whether freezing an image of someone is the same thing as killing them. It’s a discussion that goes back to the nineteenth century when photography was first invented; it was striking to people that you could capture a moment, and one of the major functions of photography was to serve as a remembrance, a way to memorialize someone.

At the end of 1998, my late wife gave me a bunch of books about writing. I had already delved way into the Duchamp thing, and she wanted to get me to write. It was our last Christmas together. She had a terminal illness, and it was the year I was starting to write about Duchamp. We spent a lot of time together and talked about it. It’s become important to me for death not to be taboo. But I think in the final version of this book, I really pulled back from that because I don’t want to be agitating anything one way or the other. I just want to present as good a story as I can.

Newsflash
"A world that is melodramatic, joyful and heartbreaking all at the same time"

Interview
Making What it Means to Write About Art: Interviews with art critics

“The interview is a very particular form as a text, in that it promises many things’’