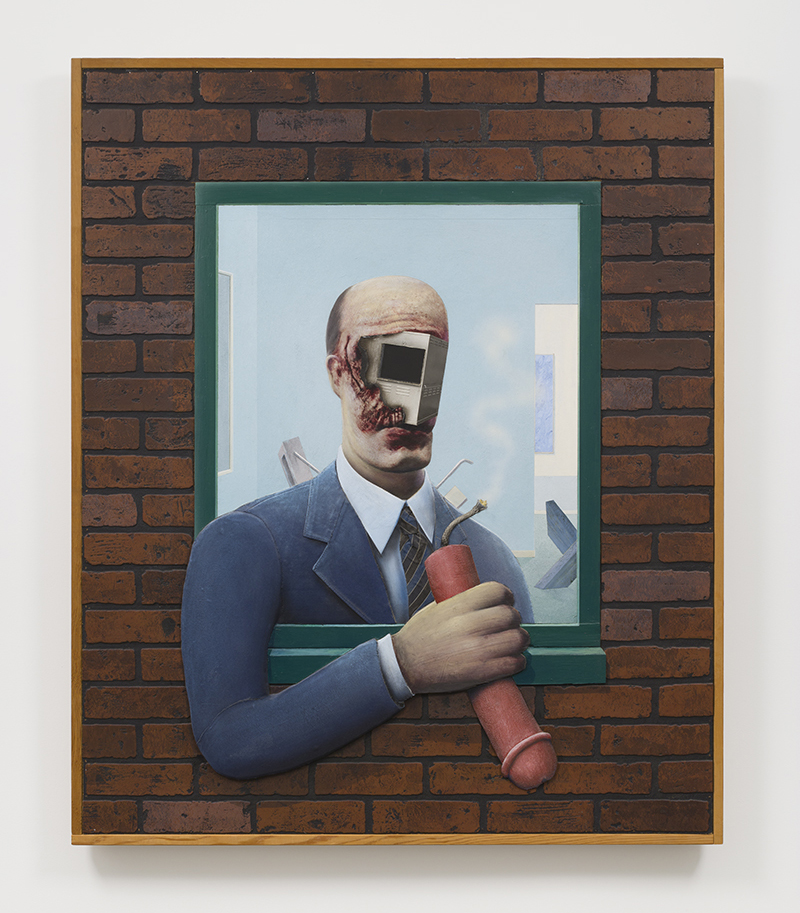 Inspired by old touristic postcards, Foulkes’s "postcard paintings" of mountains and rocks turn towards Pop, incorporating standardized imagery and serial elements. Death Valley, Calif. (1964) depicts a mountainous expanse, modeled by soaking rags in pigment and applying them directly onto the surface of the work to create a subtle texture and shading, thus attaining a nearly photorealistic quality. The work is anchored at its left and bottom edges by a yellow and black striped border, recalling cautionary road signs. Underneath five stamp-like bald eagles lies an inscription copied from a book by Ulysses S. Grant: "This painting is dedicated to the American." Is this dedication a sincere statement of gratitude or allegiance, or does it evoke a heavy-handed patriotism or claim of entitlement? The various framing devices surrounding the seemingly untouched terrain remind viewers that this is a representation, a fragmentation of the frontier that has been commoditized for cursory enjoyment.

Foulkes's "bloody head" portraits—depicting deformed or obstructed faces—began with a self-portrait, Who's on Third (1971-1973). After encountering an autopsied corpse at a mortuary, he concealed the portrait’s recognizable features with a flow of lurid-red blood and a cloth-like mask. Subsequent bloody head paintings exemplify an increasingly critical view of American politics and popular culture, taking up presidents, military figures, corporate businessmen, and the entertainment industry as subjects. In the 1980s, Walt Disney, Mickey Mouse, and other comic characters became recurring figures in his narrative paintings—now sinister intrusions representing disillusionment with the wholesome agenda proffered by the Disney Empire.

Another group of portraits integrates photographs, painted over with oil, as well as found materials that extend out of the wooden frame. With these tableaux works, Foulkes sought to attain an even greater illusion of depth. In addition to utilizing found materials, the artist's distinctive technique involves carving directly into wood to create real shadows; some of his works expand to immersive size, taking several years to finish. Old Glory(1996/2001-2003) sardonically portrays a barren landscape made of rough-carved wood and various recycled materials. At center, the American flag hangs limply over a pile of burning rubble, and in the background stands the only lasting monument: a yellow arched McDonalds sign. In Where Did I Go Wrong?(1991) Foulkes's pop cultural critique meets his earlier landscape paintings and—as with many of the works presented here—expresses a personal and collective anxiety.