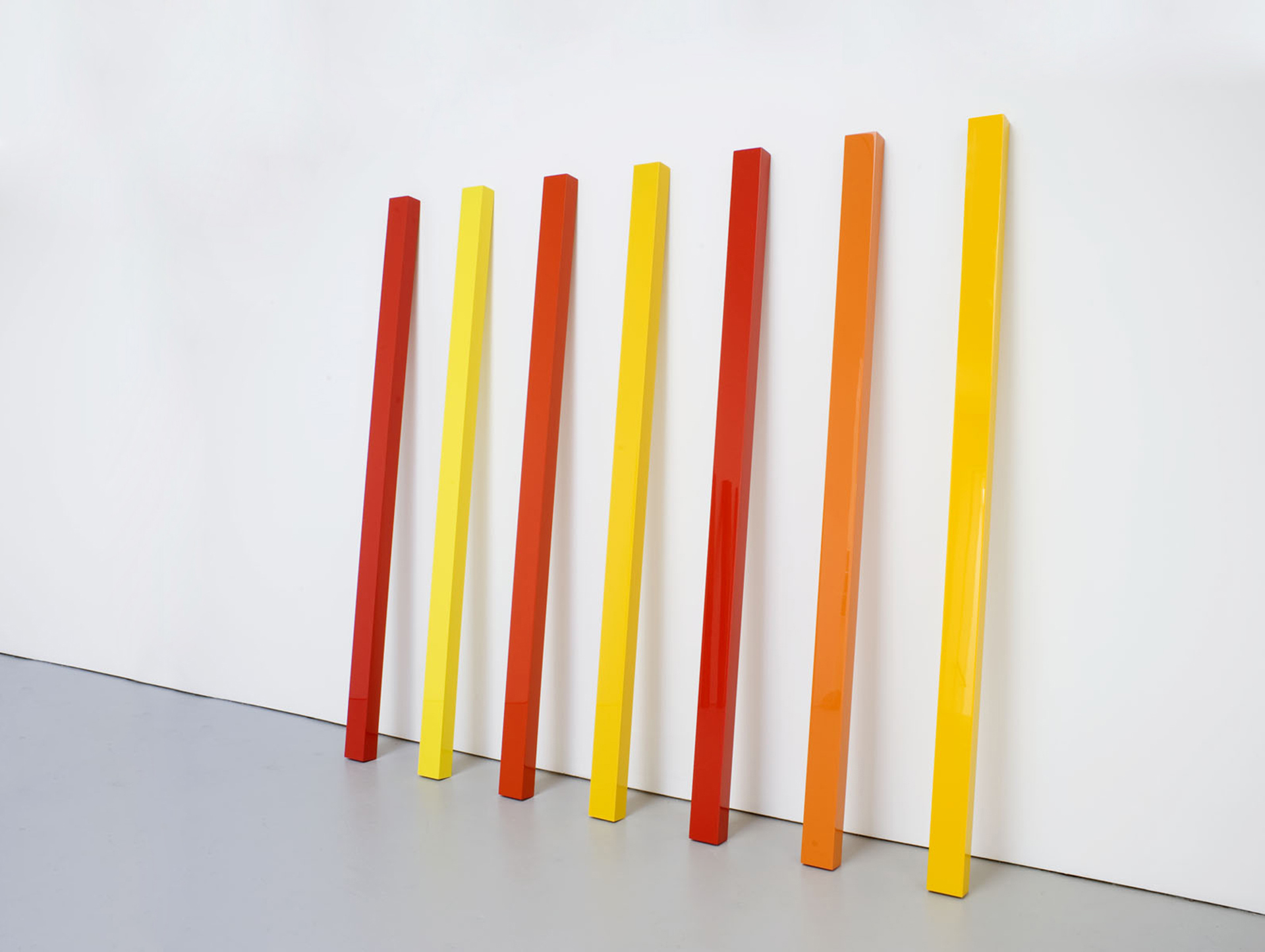 David Zwirner is pleased to present an exhibition of works by John McCracken at the gallery's 537 West 20th Street location in New York. Drawn primarily from the last decade of the artist's career, the works on view explore varying articulations of seriality within the artist's diverse oeuvre, and the way in which he engaged formal concerns, such as verticality, surface, and particularly color, as a means of composing simple, but deeply resonant sculptures and installations.

McCracken occupies a singular position within the recent history of American art, as his work melds the restrained formal qualities of Minimalist sculpture with a distinctly West Coast sensibility expressed through color, form, and finish. He developed his early sculptural work while studying painting at the California College of Arts and Crafts in Oakland in the late 1950s and early 1960s. While experimenting with increasingly three-dimensional canvases, the artist began to produce objects made with industrial materials, including plywood, sprayed lacquer, and pigmented resin, creating the highly reflective, smooth surfaces that he was to become known for.

For McCracken, color was an integral element of his practice, writing in 1966, "I think of color as being the structural material I use to build the forms I am interested in…I have found that a certain range of mainly primary and secondary colors and a certain combination of color intensity and transparency and surface finish provide me with the expressive means I want."¹ He considered similar or even identical forms executed in differing hues to be entirely individuated artworks that engage with their surroundings in a distinct way. By grouping such forms—sometimes within larger installations—he was able to explore the effects of repetition and difference, while pursuing properties of "clarity, conciseness, and effectiveness," in his work. As the artist elaborated, "In distilling my ideas I was doing something analogous to making poetry—trying, in a way, to say the most with the least."²

The exhibition will present key examples from three discrete groups of work—leaning multi-part wall pieces, wall-mounted multi-part reliefs, and freestanding columns—that McCracken created outside of his iconic "planks." On view will be a selection of the artist's "Beam" works, each comprising multiple tall narrow components that lean against the wall, first exhibited in his 2008 solo presentation at David Zwirner, but illuminated in his sketchbook as early as the 1970s. Some multi-part works, such as Space(2008), consist of a rhythmic combination of an array colors, here blue and green; while others like Song(2008) explore tonal, more subtle variations within a single color, in this case red; still others like Galaxy(2008) are monochromatic. Titles are likewise employed as a pictorial metaphor in McCracken's lesser-known wall reliefs, such as Fire(2007), created for documenta 12in 2007, and Light(2004), which exist in the interstices of painting and sculpture. Finally, a grouping of four eight-foot tall freestanding columns, arranged in a configuration similar to the artist's 2004 exhibition at the gallery, explores the phenomenological relationship between work, viewer, and architecture through their outsized stature.